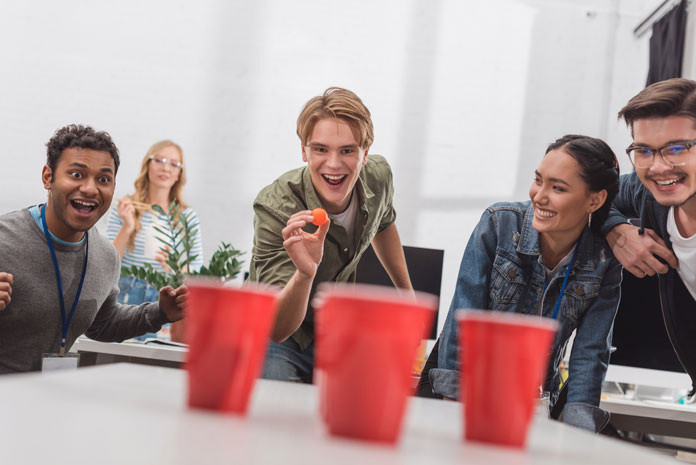 If there is one game that should be in every man cave, it’s Beer Pong. A great game to play with friends and of course beer! But before you start bouncing away those ping pong balls, lets recap the rules in order to create a fair and fun game for all.

Eye-To-Eye is when a player from each team shoots the ball while maintaining eye contact with their opponent. If both players miss or both players make it, their teammates now shoot. This goes on until one person makes it and their opponent does not.

Get your throwing technique sorted

Whether you like to lob or fastball, work out which throwing technique works for you. There is no right or wrong way to throw in beer pong, just as long as it’s going in the cup.

Start from the Front

Unless you really want to impress your friends by landing those difficult shots, you should always start from the cups at the front and work your way back. Get the easy ones out of the way. You’ll be getting better as the game goes on.

Beer pong is a game of hand-eye coordination so find a teammate that has their mind on the game. It’ll go a long way to winning.

Remember that it’s a drinking game

You may throw better after a few beers or you might throw worse. At the end of the day it is a drinking game so realize that your own game may get better or worse after a few.

Even though there are professional beer pong tournaments around the world, you’ll most likely be playing in your man cave with your buddies so don’t take the game too seriously. Your goal will always be fun so make it that way. There are countless ways to change the rules to make games even more fun.