When you have a man cave or games room, you’re going to face a dilemma. Where to store all your drinks? There’s no doubt trudging to the kitchen every time you want a beer or soda isn’t going to work, so you’re going to have to decide whether you’ll get a beverage cooler or a refrigerator. Then again, maybe you’ve inherited some old fridge from a mate who’s upgraded, and never had to think about it. We’re here to tell you that the yellowing, second-hand fridge is not only wasting space, but money too. And yes, if you can’t tell, we’re on team beverage cooler. But we agree that a refrigerator has its place too. Read on to figure out where that place is, and if your space suits one, or it’s flashy, sleeker little brother instead.

What Each is Designed For

A refrigerator and a beverage cooler are only similar in that they keep stuff cold. But even then, the way they do that is different. We need to discuss firstly why they are so different, and that comes from understanding what each was designed for. 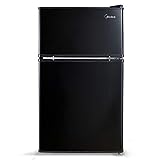 Here’s an interesting fact for you – Did you know that refrigerators were only used domestically since 1913? They’re relatively new and took a while to catch on with the public. It was common to still use the old chest freezer in the 1940’s and 50’s, until it came to a point in the 60’s where more than 90% of people had a refrigerator in their home.

But why were they made? There are two reasons, and the most obvious is to keep food at a nice cold temperature. But the other is more important: to prevent people from getting sick. Foods like dairy and meat need to be stored below a certain temperature to keep bacteria from growing and making people ill with food poisoning.

The refrigerator was designed to be set at a temperature that ensures food was safe. You cannot change the temperature on a fridge, and you probably wouldn’t want to. You don’t want to mess around with the safety of your food, anyway. But keeping it at this temperature means that other items like drinks can become iced over. Its main function is to keep food cold after all, not drinks.

These are much newer, having only been invented in the 1990’s. They are made specifically with beverages of all kinds in mind and have a lot of features tailored for that.

They have a range of temperature setting designed for different drinks, and to suit the owner’s preferences.

The Difference Between Refrigerators and Beverage Coolers

Fridges come in a range of designs. You can get the top-mount, the side-by-side, the French door, mini fridge, and more. But what they all have in common is their white or silver opaque body. They have a LED light inside, like the beverage cooler, except one that turns off every time the door is closed. After all, it wouldn’t make sense to keep it on if no one could even see it.

Refrigerators are cheap to buy outright and are more common than beverage coolers. You could get one second hand for a good price. Also, even new, a simple fridge wouldn’t be too pricey.

While the upfront cost may be lower than a beverage cooler, the trade-off is lower efficiency. This is the downside to fridges. At least, for the ones needed just for storing drinks. There are higher end fridges that use less energy, but they are beyond the needs of a games room drinks fridge, and beyond any reasonable budget too. Now if you think a mini fridge would be better, then we’re sorry to say that isn’t the case. A mini fridge draws similar amounts of power as one three times its size.

A beverage cooler is smaller than a regular fridge and is created to store beverages of all kinds. The look of a beverage cooler is much more appealing and suitable for an impressive man cave. It has a transparent door, unlike a traditional fridge, and allows anybody to see inside. The LED lights are always on and illuminate the drinks inside.

The inside is simple and lacks the bulky side trays and compartments of a fridge, usually reserved for jars and cheese. Instead, it has either a sleek chrome metal shelving or glass shelves. There are controls to set the temperature so you can have a beverage as cold as you like. It is the perfect size for your favorite drinks, whether that’s beer, wine, soda or juice. If there are any larger bottles to be stored, then the trays can be slid out and adjusted to accommodate.

A beverage cooler can either be freestanding or placed under a counter. The counter refrigerator is a hybrid between a traditional fridge and a beverage cooler. It can finish off a room nicely, but care must be taken if storing food such as meat or dairy, as the temperature must be set correctly to prevent spoilage.

This can fluctuate depending on how fancy you want to go. Even a small and simple looking beverage cooler can be more expensive than a traditional fridge.

Because of its smaller size, it is more efficient. It uses less power and will cost you less over its lifetime

While both a refrigerator and a beverage cooler both keep stuff cold, there are differences between them. If you have a man cave where you want to create an impression and save money over the long term, a beverage cooler is the way to go. And while we said earlier that our team prefers them, we also know fridges have their place.

If you have a spare fridge already, want to store your food and snacks, and aren’t bothered about having an impressive piece, then a refrigerator will do just fine.

Having the space for both is ideal as you will have a need to keep food and snacks cold and drinks just at the right temperature.

It’s important to weigh up which one is best for you, including cost, efficiency and design.

Either way, there’s no doubting the importance of have one of these in your man cave. So, grab yourself an ice-cold drink, and relax with your stocked bar!